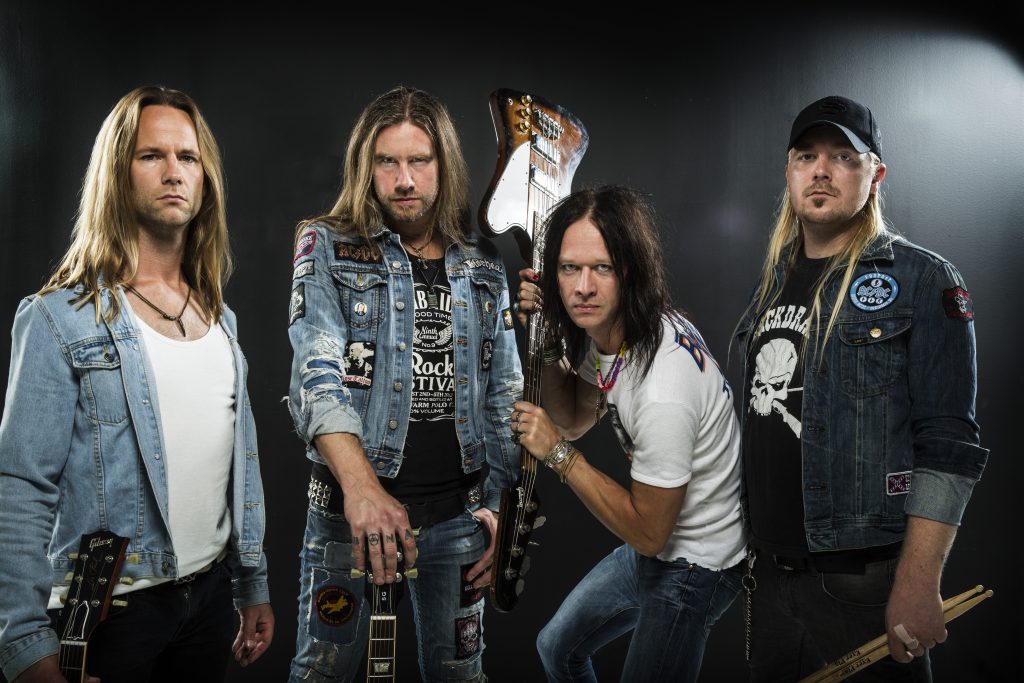 BONAFIDE was formed by singer/guitarist Pontus Snibb in Malmö, southern Sweden, in 2006. Their mission: to play hard rock the way it’s supposed to be played: true to its’ roots in the electric blues and early R&B.

In October 2007 Bonafide released their debut, simply titled Bonafide. Immediately they became quite busy playing the Scandinavian club and festival circuit, and supporting bands such as Deep Purple, Europe, Status Quo, Y&T, LA Guns, The Quireboys and countless of others in arenas and theaters.

In January 2009 Bonafide locked themselves into Music-a-Matic Studios in Gothenburg, Sweden with acclaimed producer Chips Kiesbye (The Hellacopters, The Nomads) and began to record their second full length album, titled Something’s Dripping, released world wide through Black Lodge Records. The album raced to #16 in the National Swedish Album chart, beating both Megadeth and Ace Frehley with whom they shared release date.

In November 2009 Bonafide embarked on a six week, nine country, 35+ shows long tour of Europe in support of the new album, that saw the band play clubs and theater style venues to great response.

Spring 2011 saw the band tour Europe once again. This time in support of the EP Fill Your Head With Rock – Old, New, Tried & True, originally planned as a single to promote the song Fill Your Head With Rock (also included on the Something’s Dripping CD), but the band booked themselves into a Stockholm recording studio, laid down some of their own favourite tracks by Humble Pie, Rose Tattoo and The Who, threw in some videos and leftovers from previous settings, and “voila!” – an EP was born that raced to the #1 slot on the Swedish mid-price chart.

Early December 2011, Bonafide made their UK debut at the Hard Rock Hell Festival’s main stage and another 10 shows around the UK, culminating in a show at London’s famous Islington O2 Academy, before going into the studio in early 2012 to record their third full length album.

Ultimate Rebel was released in early fall 2012 and was followed by continous touring, which quickly led into the recording of Bombo and its release in September 2013. That record’s tour circle broke a new record, with over a 100 gigs and festivals, all over Europe including the UK, Spain, Germany and of course their native Sweden.

In November 2014, the single Hold Down the Fort was released, as a first taster of the 2015 album Denim Devils – and the band celebrated with a European tour opening for their friends, Australian rockers Airbourne at packed, 1000+ venues each night. Denim Devils was tougher in its approach, mainly recorded live in bassist Martin Ekelund’s own studio Lemon Recordings in Klippan in the south of Sweden. One stand-out track was the single One Kiss, with its singalong chorus.

Early 2016, Bonafide’s Pontus Snibb decided to record a tribute to one of his heroes, Swedish singer Björn Skifs (#1 in the US with Hooked On a Feeling in the 70’s) and released the track Michelangelo, as a duet with singer Ralf Gyllenhammar of Mustasch (the song had originally been a contender in the Eurovision contest in the mid 70’s).

A year later, February 2017, it was yet again time for another album, entitled Flames, which was preceded by the single Smoke & Fire in late December. In 2017 the band also celebrated its 10th anniversary and the party certainly won’t stop! Bonafide has always done what they wanted. There’s no place for posturing. No semblance of selling out. No concessions and no corners cut. Just good, honest rock and roll.

”It doesn’t feel like this band has been going for a decade,” adds Snibb. ”On the first album I wrote and recorded everything myself and my only ambition was to get that record out. A lot of members have come and gone over the years and it’s been one hell of a ride. But I’m proud that Bonafide is still here. And still rocking.”